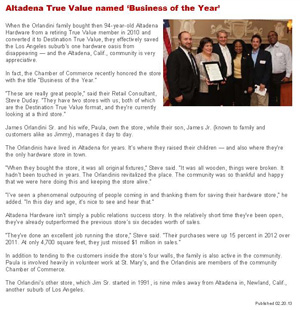 “When the Orlandini family bought then 94-year-old Altadena Hardware from a retiring True Value member in 2010 and converted it to Destination True Value, they effectively saved the Los Angeles suburb’s one hardware oasis from disappearing — and the Altadena, Calif., community is very appreciative.

In fact, the Chamber of Commerce recently honored the store with the title “Business of the Year.”

“These are really great people,” said their Retail Consultant, Steve Duday. “They have two stores with us, both of which are the Destination True Value format, and they’re currently looking at a third store.”

James Orlandini Sr. and his wife, Paula, own the store, while their son, James Jr. (known to family and customers alike as Jimmy), manages it day to day.

The Orlandinis have lived in Altadena for years. It’s where they raised their children — and also where they’re the only hardware store in town.

“When they bought the store, it was all original fixtures,” Steve said. “It was all wooden, things were broken. It hadn’t been touched in years. The Orlandinis revitalized the place. The community was so thankful and happy that we were here doing this and keeping the store alive.”

“I’ve seen a phenomenal outpouring of people coming in and thanking them for saving their hardware store,” he added. “In this day and age, it’s nice to see and hear that.”

In addition to tending to the customers inside the store’s four walls, the family is also active in the community. Paula is involved heavily in volunteer work at St. Mary’s, and the Orlandinis are members of the community Chamber of Commerce.

The Orlandini’s other store, which Jim Sr. started in 1991, is nine miles away from Altadena in, Newland, Calif., another suburb of Los Angeles.