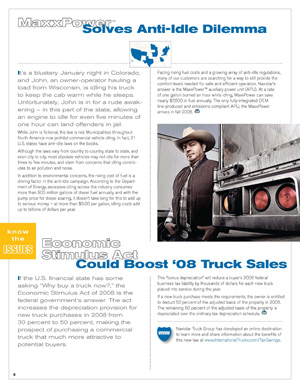 “It’s a blustery January night in Colorado, and John, an owner-operator hauling a load from Wisconsin, is idling his truck to keep the cab warm while he sleeps. Unfortunately, John is in for a rude awakening – in this part of the state, allowing an engine to idle for even five minutes of one hour can land offenders in jail.

While John is fictional, the law is not. Municipalities throughout North America now prohibit commercial vehicle idling. In fact, 21 U.S. states have anti-idle laws on the books.

Although the laws vary from country to country, state to state, and even city to city, most stipulate vehicles may not idle for more than three to five minutes, and stem from concerns that idling contributes to air pollution and noise.

In addition to environmental concerns, the rising cost of fuel is a driving factor in the anti-idle campaign. According to the Department of Energy, excessive idling across the industry consumes more than 900 million gallons of diesel fuel annually, and with the pump price for diesel soaring, it doesn’t take long for this to add up to serious money – at more than $5.00 per gallon, idling costs add up to billions of dollars per year.

Facing rising fuel costs and a growing array of anti-idle regulations, many of our customers are searching for a way to still provide the comfort levels needed for safe and efficient operation. Navistar’s answer is the MaxxPower™ auxiliary power unit (APU). At a rate of one gallon burned an hour while idling, MaxxPower can save nearly $7,600 in fuel annually. The only fully-integrated OEM line-produced and emissions-compliant APU, the MaxxPower arrives in fall 2008.”